Kim Dot Com the man behind megaupload.com which was shut down at the start of 2012 has started a new version of Megaupload.com but instead of .com for his new venture he has chosen to go with .GA – He is launching the site me.ga – A hack for mega if you visit the ME.GA website you hit with the statement below.

ME.GA redirects though to Kim.com where the site is not active yet but is currently seeking investor to help run the service for free.

There is a story below from Torrent Freak that focuses on why Kim Dot com want to use .GA instead of .com for the site but I wonder why it redirects to Kim.com – I can only assume that once it launches the site and servers with be .GA

What are your thoughts…

I had never he heard .GA being mentioned until today, I knew it existed but I have never heard anyone talking about a .GA domain name.

You can read the full story here or below.

Kim Dotcom has continued to supply more details on his new Megaupload project which is set launch early next year. Today he reveals that the new service will operate on the Gabon-based domain name ME.GA. In addition, Dotcom warns other cloud storage sites that it’s not safe to host their services in the United States, or use .com and .net domains.

Despite ongoing criminal proceedings Kim Dotcom and his team are gearing up to launch a new Megaupload, which will simply be called “Mega”.

The spin-off is set to launch on January 20, exactly one year after Megaupload was shut down. According to Dotcom the new Mega will be bigger, better, and protected against the wrath of the U.S. Department of Justice.

In previous weeks the eccentric file-sharing entrepreneur has revealed many details on how the new Megaupload will operate, but until now the site’s new domain has remained a secret. Megaupload.com is definitely unavailable as it remains seized by the U.S. Government.

The new Mega will operate from the Gabonese domain Me.Ga. With just 98,800 Internet users in a population of 1.6 million, the African country is a small player on the Internet, but this is about to change. 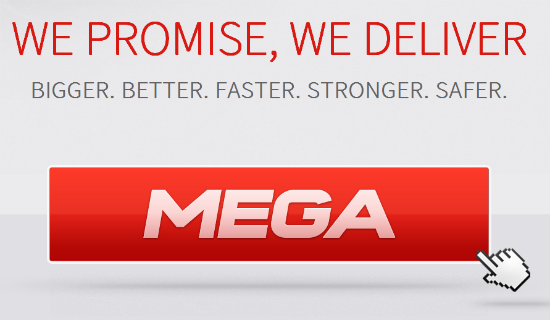 In addition to avoiding domain names that are under control of the U.S., Dotcom also notes that the new Mega won’t partner with American hosting providers.

“Unfortunately we can’t work with hosting companies based in the United States. Safe harbour for service providers via the Digital Millennium Copyright Act has been undermined by the Department of Justice with its novel criminal prosecution of Megaupload.”

In a notice, ironically hosted on Kim.com, Dotcom also advises other cloud hosting providers to stay away from the U.S. and refrain from operating domains that are controlled by American companies.

“It is not safe for cloud storage sites or any business allowing user generated content to be hosted on servers in the United States or on domains like .com / .net. The US government is frequently seizing domains without offering service providers a hearing or due process.”

Megaupload’s founder is referring to the many domain name seizures carried out since 2010 by the Department of Justice and Homeland Security’s ICE unit. Some of these domains were seized by “mistake” and were later returned.

By avoiding .com Dotcom hopes that the new Mega will be able to operate undeterred. Whether the new service can live up to the high expectations remains to be seen, but Mega’s founder is Me..Ga.. excited.